This afternoon I went to see a donkey that I had visited before and to take him some carrots. He lives in what have always appeared to be very sad circumstances: enclosed in a cage of broken old bedsteads, alone and in a fairly confined space. He is always pleased to have some company as he is alone all day. His circumstances have always appeared poor but there did not seem to be sufficient grounds to make an official complaint. I have been advised against doing so, because I am quite close to the animal’s owners – just down the road – and my own animals might suffer a reprisal if it was known I have reported the owner.

Today I found the donkey in these circumstances. Its makeshift corrugated iron roof had collapsed into its confined pen, so the metal material was scraping on its back. It had no water apart from a plastic bucket with old stagnant water with scum on the surface. The floor had no straw and it was only able to lie down in a bed of its own manure. I am putting the photos here for inspection by the authorities I am contacting now: the police, the Donkey Sanctuary in UK for advice on procedure, and the Refugio de Burros in Madrid for advice on local action.

The location of the donkey will be provided in confidence to the authorities. Here are the photos. 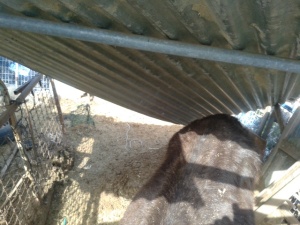 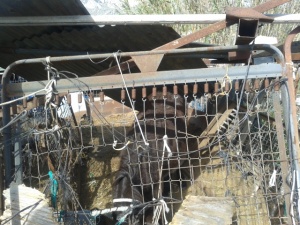 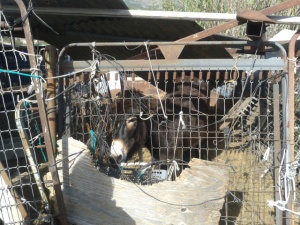 Update 9th April
I am surprised at the difficulty in getting appropriate information when you report an animal in such dire circumstances. I finally got some advice yesterday from Madrid, and the local police have been given the information about the animal. Looking at the situation today it is the same. The donkey has the corrugated metal roof collapsed on it and it is still locked in there. Nobody has yet acted on the situation. Appalling. Will try a different approach today.

I am pleased to say that some small action has now been effected. The local police have visited the owner of the donkey and he has been seen repairing the fallen roof and taking the corrugated metal out of the confined area in which the donkey lives. I would hope that the question of fresh drinking water for the donkey has also been addressed, as I told the police that this was just as important as the removal of the dangerous fallen roof.

I have to stand back from the situation, as I have gone through the official procedures and the substance of the animal abuse complaint I raised has now been addressed. I will continue to monitor the situation of this donkey and make sure that he is not put into such an alarming situation again.  I shall change my regular routes to travel that way at least once every couple of days.

In passing, I am very disappointed to record here (without mentioning any names) that I contacted some organisations and some prominent individuals who say they are concerned about animal welfare, and I raised my concern – with the photographic evidence – saying that I needed urgent advice and support.  I have still not heard from the main charity that receives massive individual donations to address exactly such issues as this one. Nobody got back to me at all.

Likewise some individuals who often put animal abuse issues on Facebook and other places have been online during the time I have been contacting them and received my request for help but ignored it.  I have removed them from my contacts list.  When action is needed, you need people who can do more than talk.

Once again, this matter has raised the need for safe refuges for mistreated animals, and I am still looking for support for a donkey sanctuary here in the long term. If anyone on the Costa Blanca who is interested in a long-term plan for such a project, please get in touch.  If anyone further afield is willing to suggest funding for such a project (again, in the long-term) please get in touch.  Such a project will only take off if a suitable team can be put together and funding/sponsorship is forthcoming.

The situation of this animal should be a clear sign that the need is there.  He should be taken into safe refuge rather than hoping a temporary fix will ensure his welfare.  At present there is no such obvious place to remove a donkey in dire need.

I am a one man operation, and I have far more work than I can really sustain, with four donkeys: I am also financing these four from my own pocket.  I cannot be a one man donkey sanctuary taking in abused animals too.  Please circulate this appeal to any you know who might support the future setting up of a local sanctuary Benidorm/Finestrat/Vilajoiosa.

My equusasinus.net blog is about a quiet life in Spain with donkeys. It was preceded by the brotherlapin.wordpress.com blog, about a journey to where I am now. The auntiepope.com is a (not entirely serious) blog about what happens when radical Catholic bloggers deviate from Church authority. I also contribute to WherePeteris.com the US Catholic website supporting the mission of Pope Francis.
View all posts by Brother Lapin →
This entry was posted in Uncategorized. Bookmark the permalink.